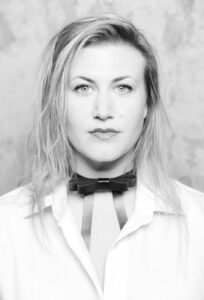 Heather Dotto is a diverse performer trained in many forms of dance and theatre at Caulfield School of Dance. With a sharp focus for detail and an undeniable love of attention, Heather has been fortunate to turn her passion for performing into a career and lifestyle she adores. Following graduation, Heather began dancing for Josh Beamish’s Move: the Company in 2005. For the following seven years, she performed, toured, and grew to be artistically involved in many new creations by Director, Josh Beamish. Within the company, Heather also performed works by Simone Orlando, Amber Funk-Barton, Susan Mensinger, and Danny Austin.
After seeing stages all over the world (Shanghai, Singapore, New York, England, Brazil, Bangkok, Seattle, Los Angeles, Toronto, Nanaimo), Heather planted her feet back in Vancouver and has enjoyed working with many members of the dance community on new creations and remounts. A selection being: Vision Impure, mmHop, Kenesis Dance, Coriograph Theatre, Heather Laura Gray, Caitlin Griffin, Lara Barclay, Monica Proenca.  As of 2012, she has found a new home with the incredible talents of Joe Laughlin in his company, Joe Ink.
She began her journey into his charismatic work when she joined the cast of his Retrospective: 25 Years show.  Heather spent the next three years making, performing, and touring “4our”, then took a rehearsal direction role for Joe; A solo Show. In May 2022, Heather returned to the stage after five years of being a new mom and performed Joe’s newest work,“Dance: Craft”.
While working with all of these celebrated choreographers, Heather’s teaching and choreographic career were nurtured at K&S Dance Productions since 2006.  She is now the head of the contemporary program and has received many accolades at the local and provincial levels.  In 2009, Heather made her professional choreographic debut as one of the invited collaborators involved in the creation of MOVE: the company’s “The Cell”.   Soon after, she premiered the solo “Gift” at Chop Shop in Seattle.  In 2017, Heather engaged in two new creations of her own, seeded by Small Stage. She has been commissioned twice by Ballet Kelowna and Lamondance in the last 4 years. For the last year, Heather has been touring across Canada and Europe as the Rehearsal Director for “Saudade”, a full-length work by Josh Beamish.
She will continue working in the role with Josh’s next world premier in January 2023. 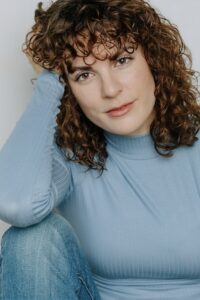 Hannah Henney is a very sought-after and engaging dancer, actor, choreographer, teacher and adjudicator. She first entered the dance scene in a Port Coquitlam studio called Chiasson at the age of three. She trained in Tap, Jazz, Hip Hop, Lyrical, Contemporary, Musical Theatre and Ballet until graduating at age seventeen. She then furthered her training with the Scholarship dance program at Drive Dance Centre, the Source Dance Company and Souldiers Dance Company. During her training, Hannah fell in love with Hip Hop and began training in many street styles like Locking, House, Popping and Waacking. After spending many summers in New York training, performing and battling, she has gained a deeper understanding of Hip Hop culture and history. Her latest style she’s added to her repertoire is Litefeet. She was selected to represent Litefeet Nation and perform with Chrybaby Cozie at the 2018 Brooklyn Hip Hop festival. She has also been building a thriving and vibrant Litefeet community in Vancouver by throwing a weekly session at Robson Square for the last three years.
Hannah’s screen dance credits include NBC’s Zoey’s Extraordinary Playlist, CBS’s The Twilight Zone, Netflix’s Chilling Adventures of Sabrina, Syfy’s The Magicians, Nat Geo’s Valley of the Boom, and Disney’s Freaky Friday. She’s also performed as an opening act for artists Mya, Meek Mill, Fabolous, B.O.B., Pusha T and Raekwon. She is a member of the powerhouse female crew, Diamonds in the Rough, and travels as a crew member throughout the U.S and Canada performing, teaching and battling.
She has also adjudicated many festivals and dance competitions throughout the Lower Mainland where she loves connecting with the youth and sharing her knowledge and experience with the upcoming generation. Her fire, passion and positivity always shine through whether she is working on set, performing on stage, choreographing a show, or in a studio with her students.
Most recently, Hannah was seen in Raincity Theatre’s production of Cabaret as Kit Kat boy Victor. She’s found a deep passion for acting, and has trained with renowned instructors Chad Rook, Jeb Beach and Shea Hampton in Vancouver. She made her acting debut in a Telus Storyhive webseries and official BIFF finalist called Auditions, then as the lead role in a short film with director Heather Perluzzo that had much success in the festival circuit. 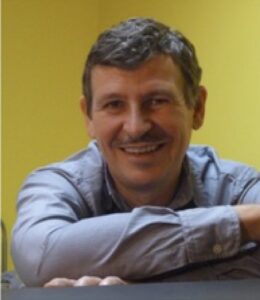 Pianist Bernard Duerksen has been actively performing, teaching and adjudicating for 40 years. He is experienced in solo, chamber and concerto work. Performance highlights include working with Jean Coulthard in preparation for the world premiere performance of Image Terrestre.  Coulthard described him as a “splendid pianist,” and the noted composer and critic David Gordon Duke described the performance as “radiant.”  In the mid-1990s, Mr. Duerksen learned the 32 sonatas of Beethoven and performed many of them, as well as piano concertos 3 and 4.  His six-year collaboration with baritone Glen Harder culminated with an invitation to perform Schubert’s DieWinterreise at the 1993 International Schubert Conference and Festival at the University of Victoria.  He has made recordings for CBC radio and is an accomplished organist.
Duerksen is a graduate of UBC with a MMus degree and is on the faculty at a number of music schools including the VSO School of Music. His students have won many prestigious awards and scholarships, and have played in master classes for John Kimura Parker, Louis Lortie, Stephen Hough, Yefim Bronfman, Inon Barnatan, and Jeffrey Kahane.  Noted pedagogue, Edward Parker stated, “Bernard Duerksen can teach anything to anybody.”
His training included studies with Peter Katin, Jane Coop, Robin Wood and composers Peter-Paul Koprowski and Gerhard Wuensch.
Duerksen is an avid runner and placed fourth in the Terry Fox Run in 1998.  In 2012, Mr. Duerksen was the hand double for John Lithgow playing Bach in the movie “Rise of the Planet of the Apes.” 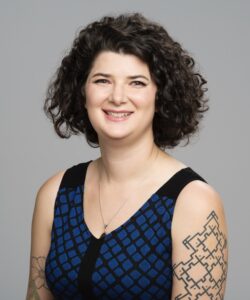 Nina Horvath is a Vancouver-based musician active as a pianist, vocalist and administrator. Raised in Rossland, BC, Nina completed her Teacher’s ARCT before going on to further studies in piano at the University of Victoria, University of Denver and the University of British Columbia.
Nina’s greatest passion has always been collaborating with other artists, especially in the creation of new works. She has always been an active leader in the musical community working as a co-founder and director of three new vocal ensembles while in Victoria and as the creator of the First Tuesdays concert series in Denver. She has had the privilege of working with many acclaimed artists and has pursued extra studies in vocal coaching and art song.
As a performer, Nina has been fortunate to work as a chorister and pianist on three different continents. She has collaborated with artists throughout Canada and the United States with a special focus on vocal and brass music. She is committed to bringing music to small communities like those in her home region of the West Kootenays, where she regularly returns to perform. She has worked from coast to coast, including a year on staff for the Fountain School of Performing Arts at Dalhousie University. She has served as music director on productions in Victoria, Salzburg, Halifax and Vancouver. She is also a committed teacher who has mentored students to award-winning festival and exam performances.
Today, Nina divides her time in Vancouver between serving as Executive Director for Coastal Jazz, singing with the Vancouver Cantata Singers, working as a pianist and coach at the Vancouver Academy of Music, and playing for as many local singers and instrumentalists as she can. She previously served as Executive Director for the Vancouver Bach Choir. When not immersed in music, you can find her adventuring in the mountains. 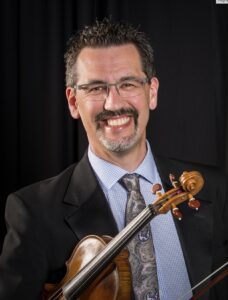 Calvin Dyck was born in Vancouver and grew up on a Christmas tree farm in Mission where he was introduced to music by a travelling Accordion salesman.
Although a college aptitude test recommended a career as a tug boat captain, Calvin finished a Doctor of Musical Arts degree in Violin Performance as University of Southern California with minors in music education, choral conducting, and music history. He currently has about 25 students.
Calvin has been concertmaster for the Vancouver Island Symphony for 23 years and is the director for the Abbotsford Youth Orchestra.  He has performed in over 15 countries, and is in demand as a producer, teacher, conductor and adjudicator.
Calvin has been awarded the Queen Elizabeth II Diamond Jubilee Medal for service to the community.  He has also been awarded an honorary Doctor of Humanities by Trinity Western University.
Calvin was recently appointed Artistic Director for the Oceanside Classical Concert Society in Parksville, and Artistic Manager for the Vancouver Island Symphony in Nanaimo. 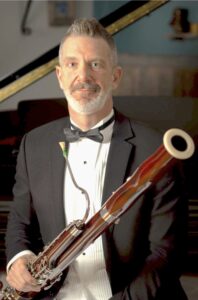 Originally from Newfoundland, Daryl Price completed an undergraduate degrees from Memorial University of Newfoundland in both Music, with a principal study in trumpet and a focus on choral music and in K-12 Music Education, where he completed his teaching practicum in Harlow, England. In 2011 he completed the graduate degree program at the University of Alberta and attained a Master of Education with a focus in choral education.
Aside from teaching. Mr. Price is a multi-faceted instrumentalist and vocalist. He has performed with the University of Alberta Symphonic Wind Ensemble as a horn player, flutist, bass clarinetist and most recently, as a bassoonist; with the University of Alberta Symphony Orchestra as a bassoonist, three years as the principal trumpet player and bassoonist with the Concordia Symphony Orchestra and has played with the university’s saxophone ensemble as an alto player. As a vocalist, he has sung as a baritone with the Greenwood Singers, and he has been heavily involved with the musical theatre community in Edmonton, where he still commits much of his time as a musical director, vocal coach and instrumentalist.
For the past six years, Mr. Price has been a part of the University of Alberta Music faculty where he is currently the director of the University of Alberta Concert Band. He is also an instructor in the Music and Education program, where he teaches woodwind techniques and facilitates a lab band program where students gain practical experience as band directors. For the past twenty-two years, he has been a teacher with the St. Albert Public School Board, where he continues to teach Junior High Band, High School Band, Choir, Musical Theater, Math and Science.